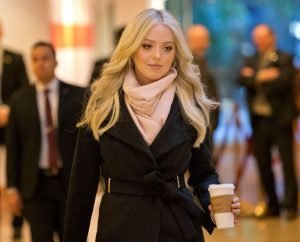 Tiffany Trump net worth: Tiffany Trump is an American public figure and aspiring singer who has a net worth of $10 million. Tiffany Trump is probably most famous for being the daughter of businessman, politician and reality television star, Donald Trump. She was born on October 13, 1993 in New York City. She mainly grew up in the Los Angeles area with her mother Marla Maples. Tiffany graduated from the upper-crust private school, the Viewpoint School in Calabasas, California, where she competed in varsity volleyball. She also traveled around the world courtesy of her father’s private jet. She attended undergrad at the University of Pennsylvania followed by Georgetown University for law school. Unlike the rest of her family, she is not focused on a career in business. Instead, she is focused on a career in music, and recently released her first single, entitled “Like a Bird”. She is taking her music career slowly, as she views college as her highest priority. Her childhood was largely separate from the rest of the Trump family, and she has only recently begun to spend time with her famous father. In 2016, Tiffany was a central figure in her father’s successful Presidential campaign. She spoke at the Republic National Convention and was a frequent guest at debates and media interviews.