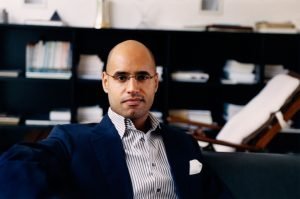 Saif al-Islam Muammar Gaddafi (Arabic: سيف الإسلام معمر القذافي‎; born 25 June 1972) is a Libyan political figure. He is the second son of the late Libyan leader Muammar Gaddafi and his second wife Safia Farkash. He was a part of his father’s inner circle, performing public relations and diplomatic roles on his behalf.[2] He publicly turned down his father’s offer of the country’s second highest post and held no official government position. According to American State Department officials in Tripoli, during his father’s reign, he was the second most widely recognized person in Libya, being at times the “de facto” Prime Minister,[3] and was mentioned as a possible successor, though he rejected this