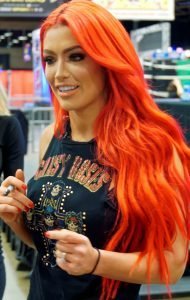 In 2013, she signed a contract with WWE and was assigned to WWE’s Performance Center in Orlando, Florida to begin her training  In July 2013, she made her main roster debut under the ring name Eva Marie, and later in the month became the manager of The Bella Twins, and also began starring in the reality television series Total Divas as part of the main cast. In mid-2015, she began wrestling as part of the NXT women’s division. In April 2016, Eva Marie returned to the main roster, officially becoming a part of the SmackDown brand in July 2016. She left WWE in August 2017.